Handing Over Ceremony of the Environmental Monitoring Equipments 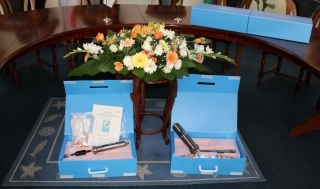 On 14 July, handing over ceremony of the environmental monitoring equipments consisting of three units of electromagnetic current meter and three units of turbidity sensor, was held at Port-Louis in the presence of the Ambassador KAWAGUCHI and the Hon. Sudheer MAUDHOO, Minister of Blue Economy, Marine Resources, Fisheries and Shipping.
These equipments were granted by the Government of Japan through the Japan International Cooperation Agency (JICA) as assistance of Japan to the Republic of Mauritius following three teams of the Japan Disaster Relief Team. They will be set in the sea to monitor underwater conditions of the affected areas.